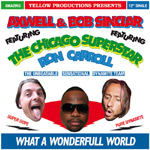 Because of Obama’s presidency I was planning on putting the speech of Martin Luther King as acapella of the month. But I think we have a new version of this speech: What a wonderful world from Axwell & Bob Sinclar Feat. Ron Carroll.

The description of a dream describing a perfect world makes the link with Martin Luther King. And if you play the intro of the acapella without any music you just have another great freedom speech. A speech that would be great as a house set intro. That is why I really like the Nari & Milani Remix and that is why Axwell & Bob Sinclar Feat. Ron Carroll – What a wonderful world is the acapella of the monty February.